FBDplc.com
Farmer Business Developments plc
Why set up this website? . . . Who is Brian Marshall? . . . Suggested Improvements for FBDplc
VOTE for me in 2019 . . . How to Contact me . . . How to SELL shares

I asked the following 3 questions in my original letter

1] With regard to the Property & Leisure deal, why did our Board not reveal their individual shareholdings in FBD Holdings?

2] Has our Board, with the majority of it's Directors holding minimal amounts (2000 or less) of shares, got too much power?

3] Did the Board consider the age profile of it's shareholders, and their dividend and income needs, when doing a deal which takes us from €25m cash to €45m debt?

Here is Padraig's reply, in full. My further comments are below his letter. 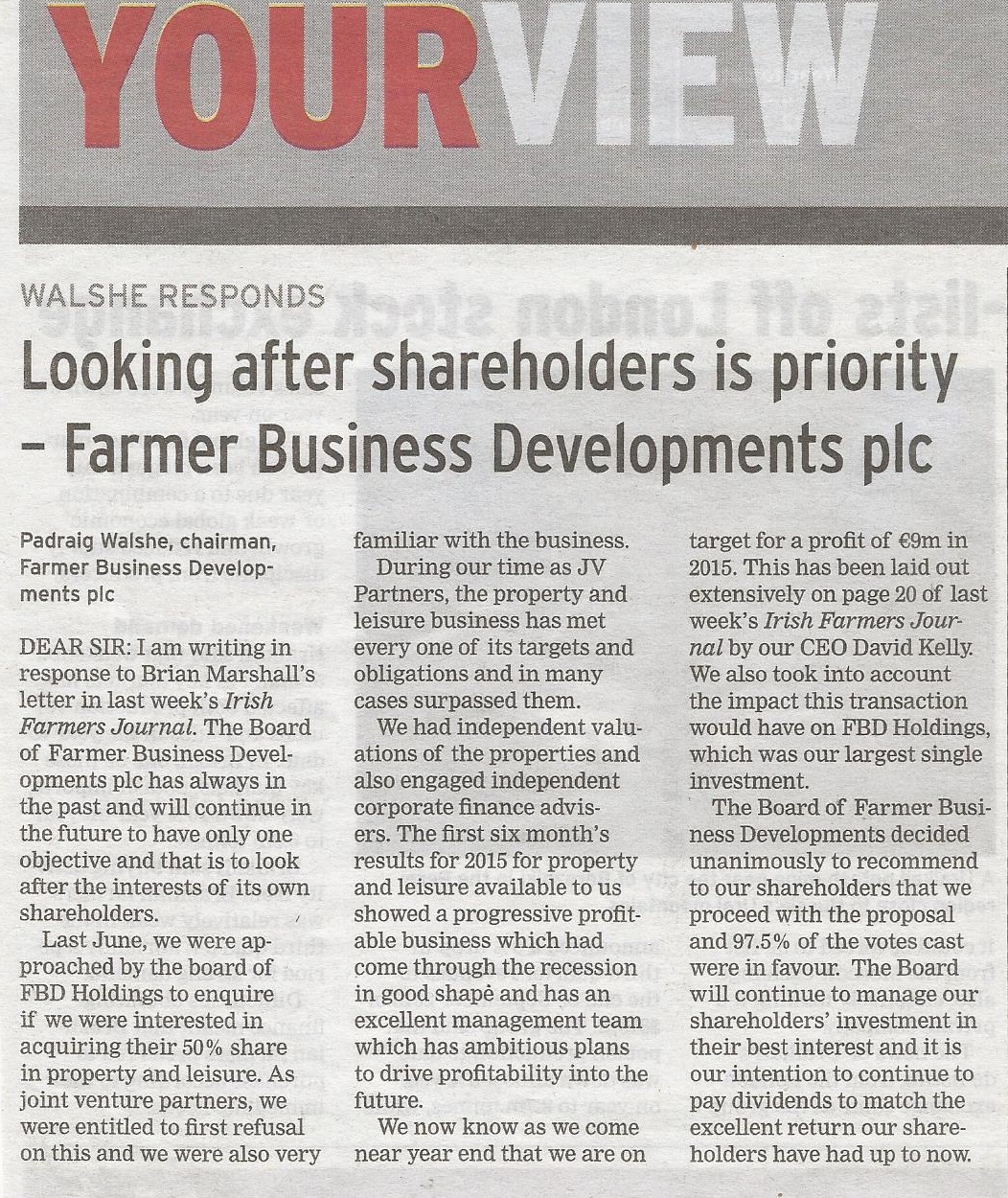 1] None of the questions I asked above were really answered.

2] Although Property & Leisure are on track to make €9m GROSS profit, (not NET profit) nothing has been said in the reply about the fact that between this year and next €9.5m of expenditure is planned just to upkeep the folio properties, and interest will cost at least €1.5m. These figures were revealed by Property & Leisures Chief Executive, David Kelly, to the Farmer's Journal on Nov. 21st 2015.

3]Padraig is being VERY disingenuous when he states "to pay dividends to match the excellent return our shareholders have had up to now"
This might be true if you have had your shares for 40 years. But it's not true now. Anybody who bought shares in the Company between 2005 and 2010 paid €3 to €7 each for them. The shareprice last traded at 80 Cents. (Oct.'15) Offers to buy shares at as low as 50 Cents have been published.
Value has been completely destroyed. The 2013, and 2014, and 2015, dividend was 5 Cents. That's down from 7 Cents in 2012 & 2011.
If you paid €7 for your shares you will have to wait 140 years to see your money back from dividends.

But that need not be the case. The Company has net assets of over 3 per share. There are other property assets outside of those that are in Property & Leisure. Some of these, like the Geneva Commercial Property, are at the stage where they could be sold. I would argue that the proceeds of such sales should be paid out to the Farmer shareholders. If I was a Board Member, I would push for this, rather than build a cash reserve to, yet again, bail out FBD Holdings.


I want ALL shareholders to know what's going on in OUR Company.