Latest - The Irish Farmers Journal agree with me Read HERE

The New Memorandum and Articles of Association, and why, in my opinion, we needed to vote AGAINST at the 2016 AGM.
This page has been updated after the answers given at the AGM by the Board

I believe that my asking of searching questions at AGM2015 and EGM 2015, and my setting up this website has forced the Board to modernise for the good of the Company. Many questions remain to be addressed, but I have had some answers, and the new 20 page Constitution addresses some more, and the Board gave some answers at the AGM.

That said, having read very carefully over the new document, I can STILL see many dangers for shareholders in it as it stands, as it gives the Board, from Board answers, far too much power without any need to consult with ordinary shareholders.

I have photocopied all pages. I will point out the dangers to shareholders that I STILL see post AGM, as I go down page, especially Articles on pages 15, 16, 18 & 20 . Click on the page link [ in blue below page images] or click these small pages to get bigger ones. 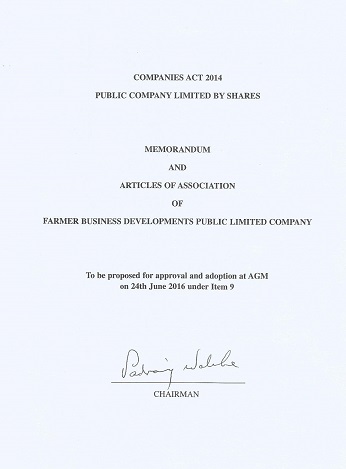 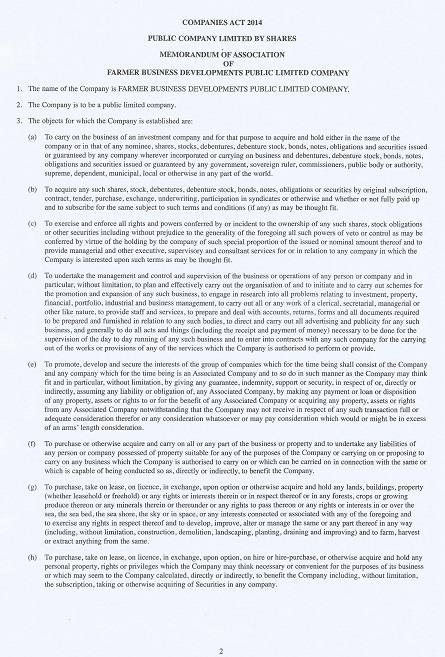 My first observation [page 2] Clause 3(e) - One of the objects of the Company is to give a Blank Guarantee, regardless of cost to the Parent Company, for the liabilities of any Associated Company. Do shareholders really want this? 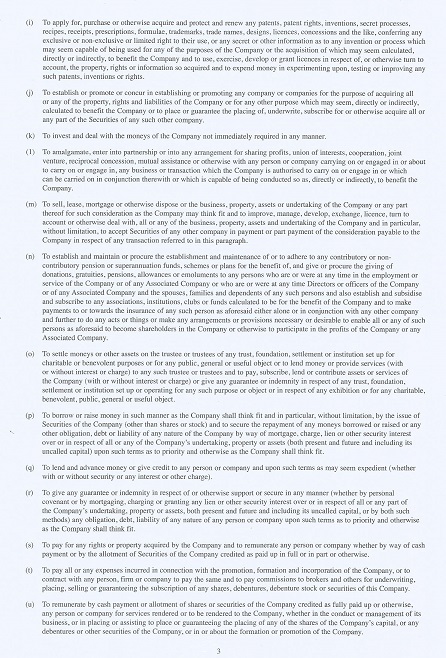 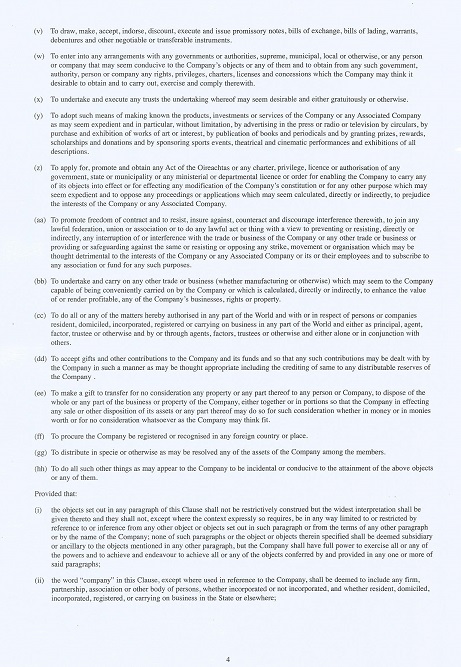 Page 4 - Clause 3(y) - Why is the Internet not included here?
With regards to Clause 3(gg), surely this clause should have a superiority over Clause 3(ee) with regard to clause (i) underneath. I.E. That the object of the Company should be to reward shareholders before giving away it's assets/monies to charities? 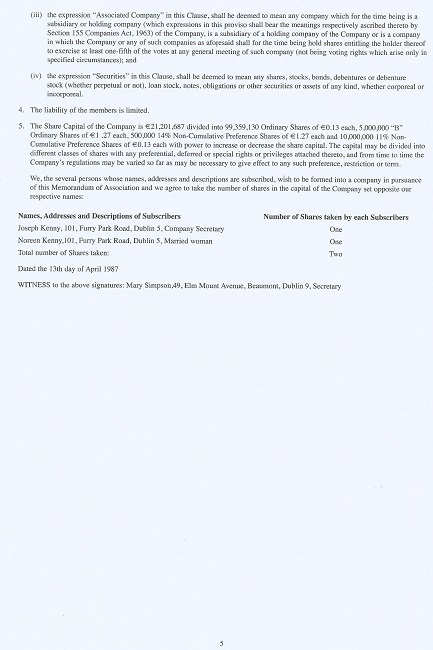 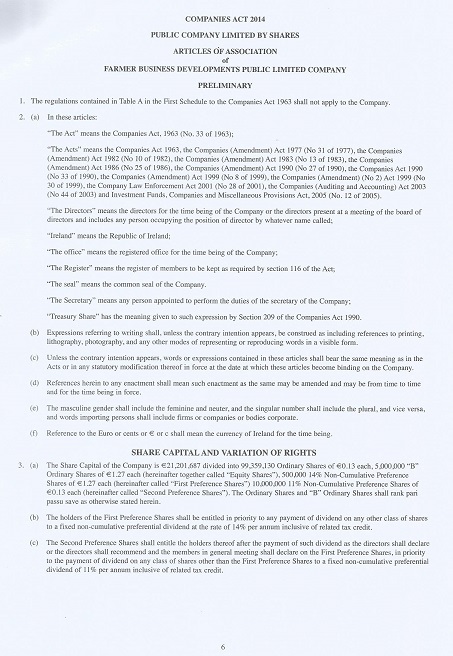 Page 6 Article 2(b) Does this include electronic communication e.g. email or messaging? 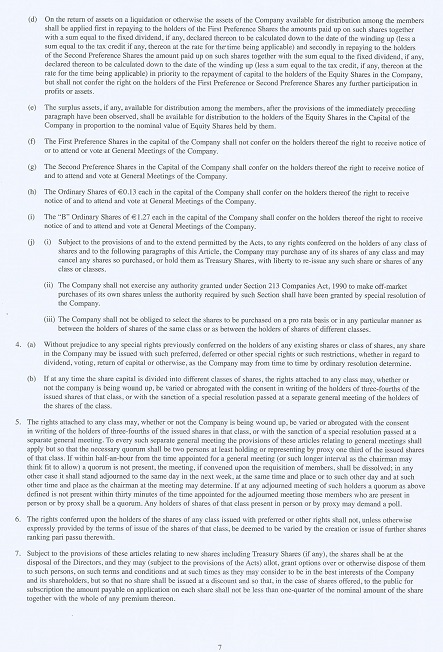 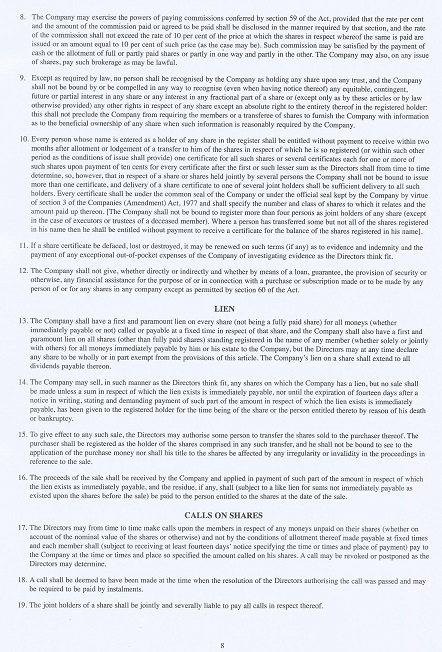 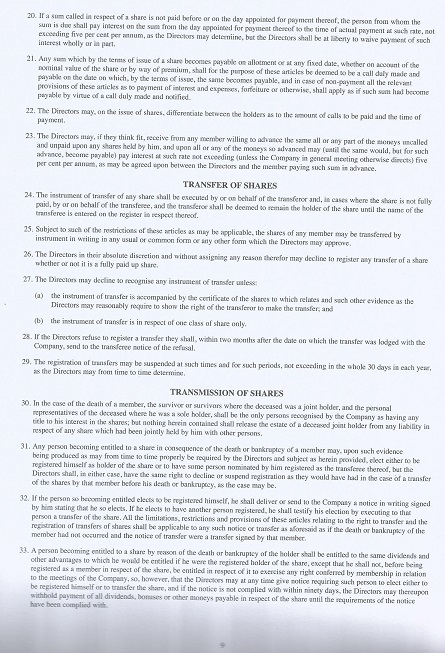 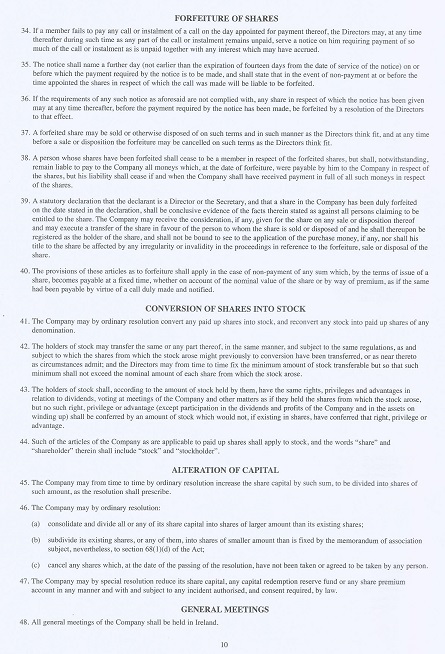 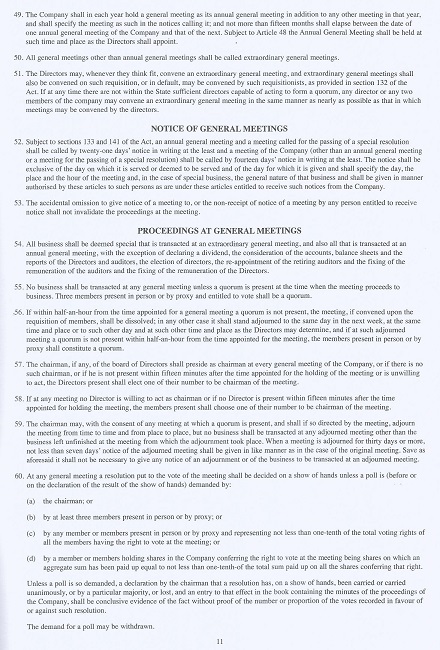 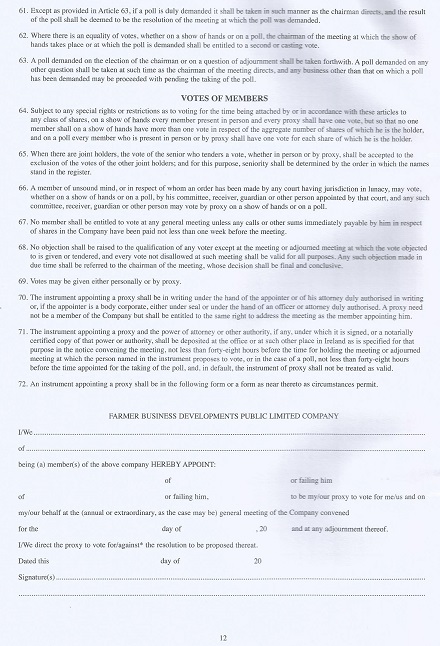 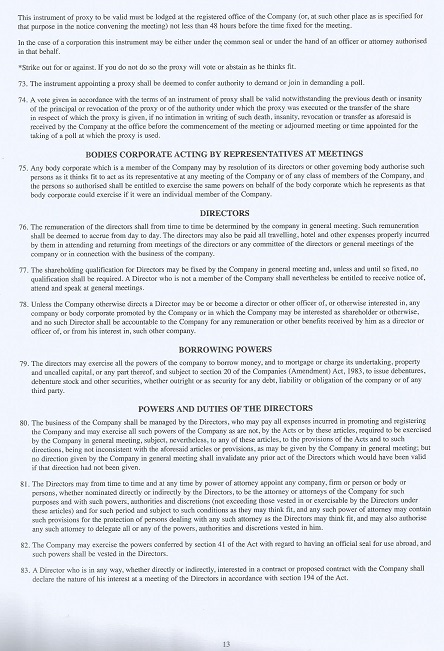 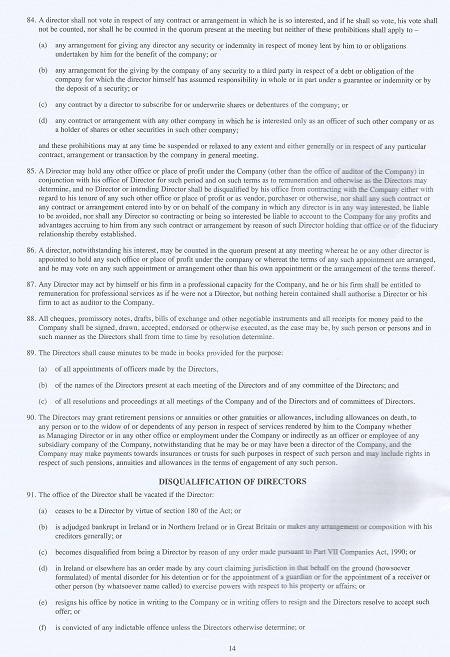 Page 13 - Article 76 - In view of the goings on within IFA between 2005 and 2015, surely it is reckless to allow Directors set their own remuneration level without external observation, transparency or information on such being provided to ordinary members?
(For the record, I do not think that €6K a year + expenses is overly excessive for our Directors, and I think that €11K for the Chairman of our Company is a fair salary)

POST AGM COMMENT -I welcome the setting up of Audit & a Remunerations Committees. There needs to be, in my opinion, representation on both that is independent of the present Board.

Article 77 - Should any Director of the Parent Company not be compelled to become a member/shareholder? Did the Directors not observe the disquiet of members when Padraig Walsh disclosed at the 2015 EGM that the Board, the majority of whom had 2000 shares or less, had taken the biggest decision in the Company's history without allowing shareholders representing 91% of the Company a vote?

POST AGM COMMENT - Yet again the fact that many Board member's individual holdings of shares "wouldn't buy a bullock" was highlighted. I still hold with my opinion that Directors should have to have, or undertake to purchase, a minimum number of shares, especially as the Board is blocking off potential new shareholders. ( As I discuss and highlight HERE )

Article 78 - Is it not extremely foolish that Directors are not compelled to disclose all their other business interests and directorships, to avoid any potential conflict of interest with the interests of the Company?

Page 14 - Articles 83 & 84. - For the good of our Company, did Directors declare their shareholdings in FBD Holdings prior to their deliberations on the takeover of Property & Leisure? I note that now, after this horse as potentially bolted, the May 2016 Chairman’s Statement includes, as a measure to strengthen business oversight, “Adoption of a Conflicts of Interest Policy applicable to all Directors within the Group”


Article 85 - Could the wording of this Article allow for a future non-disclosed conflict of interest between a Director and the Company?

Article 90 - What pensions have already been granted? What is the future liability on such going forward? 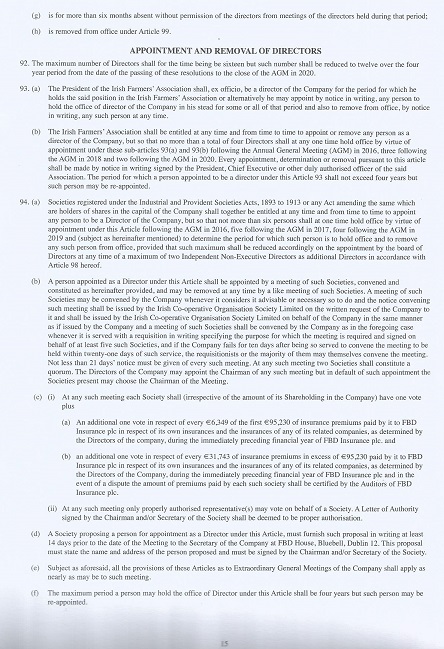 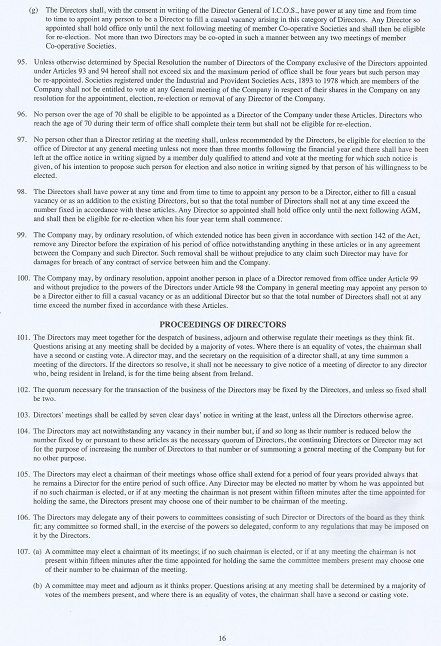 Page 15 - Article 93. [a]“The President of the Irish Farmers’ Association shall, ex officio, be a Director of the Company” (or will have the right to appoint someone in his place) and [b] “The Irish Farmers’ Association shall be entitled at any time and from time to time to appoint or REMOVE ANY [implied here, but omitted in error - "such"] PERSON (* Note – NOT “any person initially appointed by them”) as a Director of the Company, but so that no more than a total of four Directors shall at any one time hold office by virtue of appointment under these sub-articles 93[a] & 93[b]” following the 2016 AGM

POST AGM COMMENT - I think that the Board's AGM answer "We set it up, so we should be entitled to run it" stinks to high Heaven of arrogance and aloofness, and dismisses the rights of ordinary shareholders.
IFA Management may have set up FBDplc, but ordinary IFA MEMBERS bought the shares ( Management & Co-Ops have less than 10%) and this is a PLC, not a Co-Operative Society. Ordinary members rights need to be recognised, including their right to have their nominees go head-to-head with sitting Board Members for election/re-election.

2] Why should the IFA have a right to remove ANY Director and appoint a replacement?

POST AGM COMMENT - As we discovered, Article 93b is poorly worded, and can be interpreted 2 ways. I will accept at face value the Board's assurance that the IFA can only remove "such" Board members as it, or it's President, nominates.

Article 94. [a] “Societies registered under the Industrial and Provident Societies Acts 1893 to 1913, or any Act amending the same which are holders of shares in the capital of the Company shall together be entitled at any time and from time to time to appoint any person to be a Director of the Company, but so that not more than six persons shall at one time hold office “ following the 2016 AGM.

I’ll ask - Why should the Co-Ops / ICOS, who now only own 8% of the shares of the Company, still be entitled to nominate any more than 2 Directors?

POST AGM COMMENT - I have since originally writing my question above now been informed by Padraig that Co-Ops only hold circa 5%, not 8%, of the shares. So why the entitlement to more than 1 Director ?

Page 16 (below) Article 95. “Unless otherwise determined by Special Resolution, the number of Directors of the Company exclusive of the Directors appointed under articles 93 and 94 hereof shall not exceed six”

I’ll ask 2 questions 1]- Why should the other 91% of shareholders only have 6 Directors, presently and after 2020, potentially being in a position where the IFA and ICOS appointed Directors, now representing only 9% of the shares of the Company, can outvote them?

2] The charitable FBD Trust has an 11% holding in the Company. Why has it not got an automatic right to nominate a Board member?

POST AGM - I now believe even more strongly that the Trust has a bigger right than either the IFA or Co-Ops to a Board member, and SHOULD HAVE ONE. 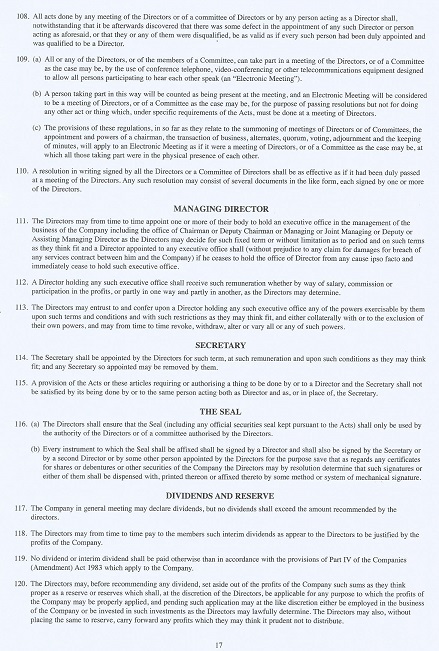 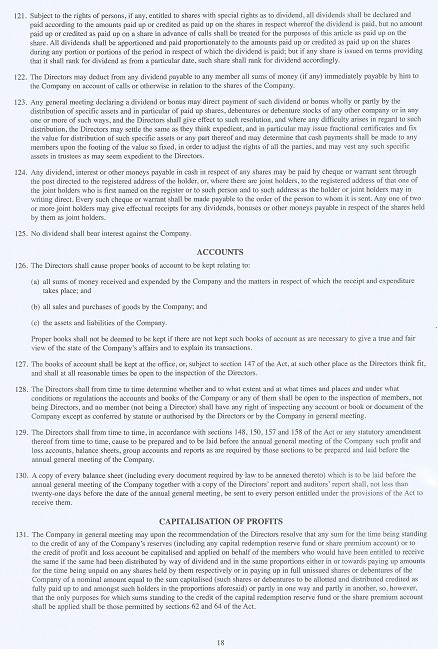 The Company Secretary has answered this question for me today, June 10th. Padraig earns €11K + expenses and I think this is a fair salary. But the Company still needs to remain open about salary and expenses going forward. 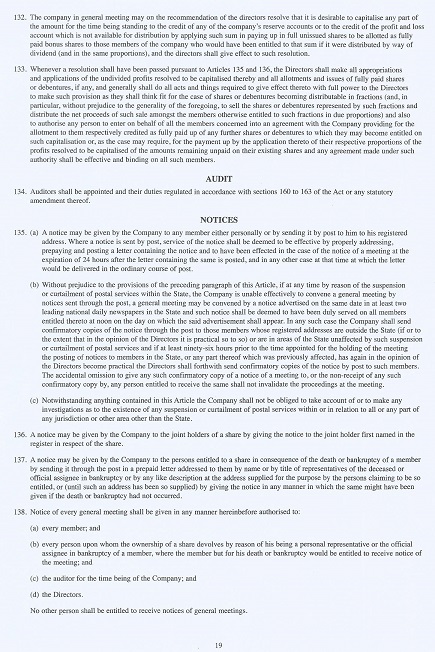 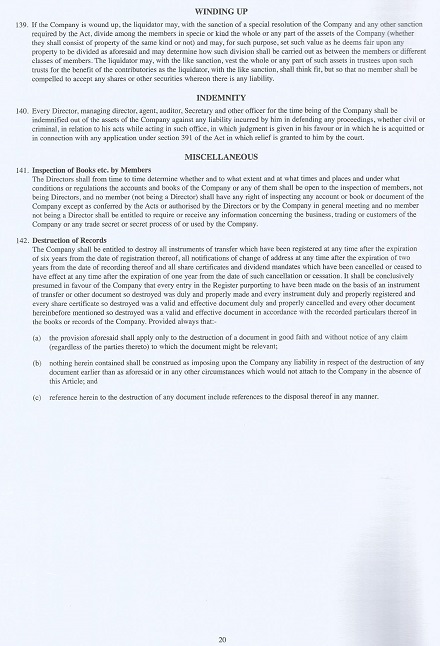 Page 18 Article 128, “The Directors shall from time to time determine whether and to what extent and at what times and places and under what conditions or regulations the accounts and books of the Company or any of them shall be open to the inspection of members, not being Directors, and no member ( not being a Director ) shall have any right of inspecting any account or book or document of the Company except as conferred by statute or authorised by the Directors or by the Company in general meeting”

and Page 20 – Article 141. “The Directors shall from time to time determine whether and to what extent and at what times and places and under what conditions or regulations the accounts and books of the Company or any of them shall be open to the inspection of members, not being Directors, and no member ( not being a Director ) shall have any right of inspecting any account or book or document of the Company except as conferred by the Acts or authorised by the Directors or by the Company in general meeting and no member not being a Director shall be entitled to require or receive any information concerning the business, trading or customers of the Company or any trade secret process of or used by the Company”

I’ll ask - Do members/shareholders, the 91% majority of whom are under-represented at Board level, really want to give Directors the absolute power to restrict or block completely any concerned member/shareholder who wants to check the books?
What is there to hide? e.g. is there truth in the rumour that some past IFA nominees took their full Directors salary but attended few if any meetings, or that some IFA Presidents have used FBDplc directorships as a perk for their Cronies?

Today, June 10th, I have got assurances from the Company that all past Board meetings have been "well attended". I would still like ordinary members to have the right to verify this, and to inspect the books, within reason.

POST AGM COMMENT - I will accept the opinion of the Board's Legal Advisor, expressed at the AGM, that it is normal Public Company policy to have in place such protection against members inspecting the books, and the Auditor's assurances, also expressed, that nothing is amiss or abnormal.

BOTH THIS NEW MEMORANDUM, AND NEW ARTICLES OF ASSOCIATION ARE FLAWED, BUT i ALSO ACCEPT THE BOARD'S STATEMENT THAT REFORMING THE CONSTITUTION IS A "WORK STILL IN PROGRESS" & I LOOK FORWARD TO PROPOSALS AND AMENDMENTS COMING FORWARD THAT ARE "FOR THE GOOD OF ORDINARY SHAREHOLDERS"

I will suggest amendments on this site, and I welcome all contact from any shareholder with suggestions.

As I believe the best place to help make positive change is "inside" rather than "outside", I will continue to seek election to the Board

I want ALL shareholders to know what's going on in OUR Company, for the good of OUR Company.